"...no health risks have been established from exposure to the low-level radio signals used for mobile communications."

Mobile phones and mobile masts transmit and receive radio waves, which are a type of electromagnetic radiation. Importantly, this type of radiation is classed as mainly harmless, or in scientific terms, non-ionising when used within guidelines, just like our TVs, remote controls, home WiFi and so on. It is widely recognised that the strength of the signals is extremely weak and therefore does not have enough energy to cause adverse health effects.

As you can see from the graph below, 5G falls way short of the ionising (harmful) part of the electromagnetic spectrum. 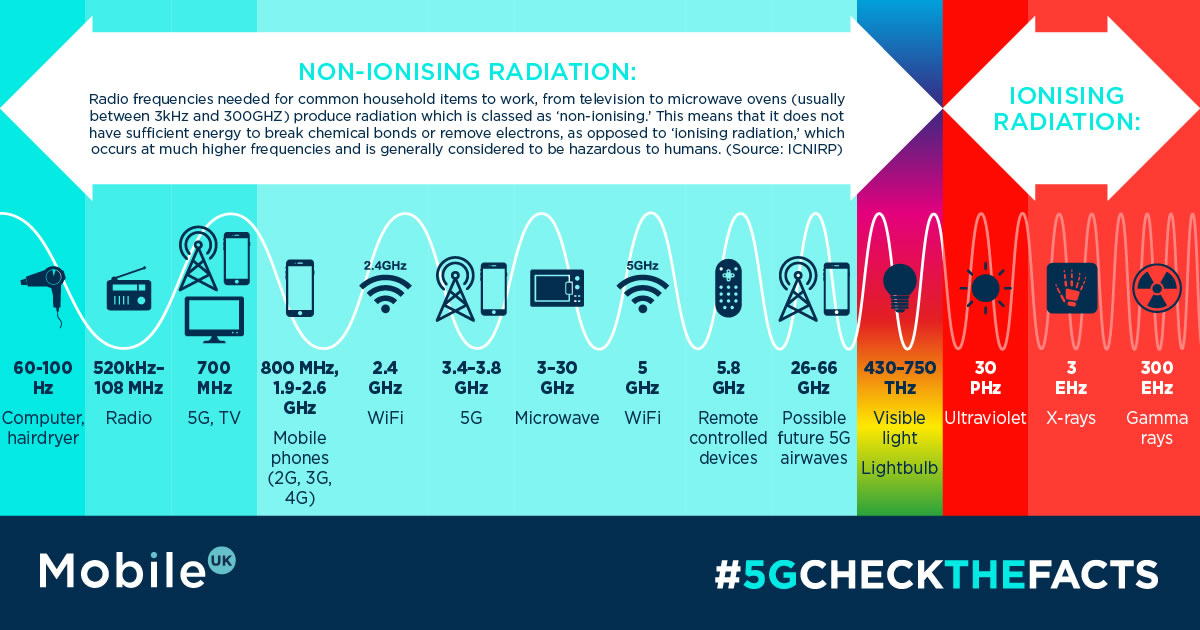 The exposure guidelines in the UK have been developed by the International Commission on Non-Ionizing Radiation Protection (ICNIRP), following a comprehensive assessment of all the peer-reviewed scientific literature, including thermal and non-thermal effects. The guidelines are based on evaluations of biological effects that have been established to have health consequences. The WHO recommends that countries adopt the ICNIRP guidelines.

Many independent expert groups have reviewed the available evidence. The GSMA, the global body representing the worldwide mobile communication industry, hosts a comprehensive tabulation of such reports dating back to 1978 on its website. [1]

Yes, current UK and international guidelines cover all frequencies used for mobile telephony, including those being allocated to 5G.

The ICNIRP guidelines, updated in 2020, monitor frequencies up to 300GHz, anything below this threshold is considered to not cause adverse health effects. 5G radio waves fall well within this category, operating at 700MHz and between 3.4GHz 3.6GHz.

Have the guidelines been tested?

Yes, Ofcom recently (February 2020) extended its programme measuring EMF emissions from equipment used to transmit mobile signals and other wireless services to cover the frequencies being used for 5G. It measured 16 5G sites in towns and cities across the UK, focusing on areas where mobile use is likely to be highest. At every site, emissions were a small fraction of the levels included in international guidelines, as set by ICNIRP. And the maximum measured at any site was 1.5% of those levels. Further information can be found here.

What kind of research exists on the possible health risks from exposure to 5G?

Information on new research and details of individual studies can be found in the EMF-Portal web database maintained by the RWTH Aachen University, Germany: https://www.emf-portal.org/en

The radio signal exposure characteristics of 5G are similar to those of existing mobile technologies. In particular, the new applications use similar transmitting powers and operate in similar frequency ranges.

Is 5G safe? What about cancer?

Mobile phones and mobile masts transmit and receive radio waves, which are a type of electromagnetic radiation. Importantly, this type of radiation is classed as mainly harmless, or in scientific terms, non-ionising. The strength of the signals is extremely weak and therefore does not have enough energy to damage DNA or directly cause cancer.

Many people who are concerned about 5G and cancer cite that the International Agency for Research on Cancer classified mobile phones as ‘possibly carcinogenic.’ This dates back to 2011, following a series of studies that were not considered conclusive, nor did they take into account factors that could distort the data. Mobile signals were therefore added to this category as a precautionary measure. To put this in context, talcum powder and eating pickled vegetables are also classed as ‘possibly carcinogenic.’

It is widely recognised that non-ionising radiation is not capable of directly causing cancer when used within guidelines.

What is the advice from Public Health England?

Public Health England’s main advice, republished in May 2019, about radio waves from base stations is that:

“The guidelines of the International Commission on Non-Ionizing Radiation Protection (ICNIRP) should be adopted for limiting exposures.

After reviewing the evidence, ICNIRP set guidelines to avoid excessive heating of the body, an established impact of exposure which can detrimental effects. The ICNIRP guidelines apply to frequencies up to 300 gigahertz and cover exposures arising from new 5G base stations as well as from older technologies.” [2]

What is the advice from the WHO on mobile phones and health?

Are children at a greater risk?

There have been many independent scientific reviews, and these have consistently concluded the international guidelines are protective of all persons, including children.

There are currently few studies specific to children and this topic remains an active research area. The international exposure guidelines have been developed based on conservative assumptions to be protective of all persons.

“Although a substantial amount of research has been conducted in this area, there is no convincing evidence that RF field exposure below guideline levels causes effects in adults or children.” (United Kingdom Health Protection Agency (2012)). [3]

Can I reduce exposure?

Mobile phones are designed to automatically reduce power to the lowest possible level to make a quality connection. When used in areas of good reception a mobile phone will operate at lower transmit power. For those who are concerned, exposure to radio signals can be reduced by limiting use of wireless devices or increasing the distance between the device and the body.