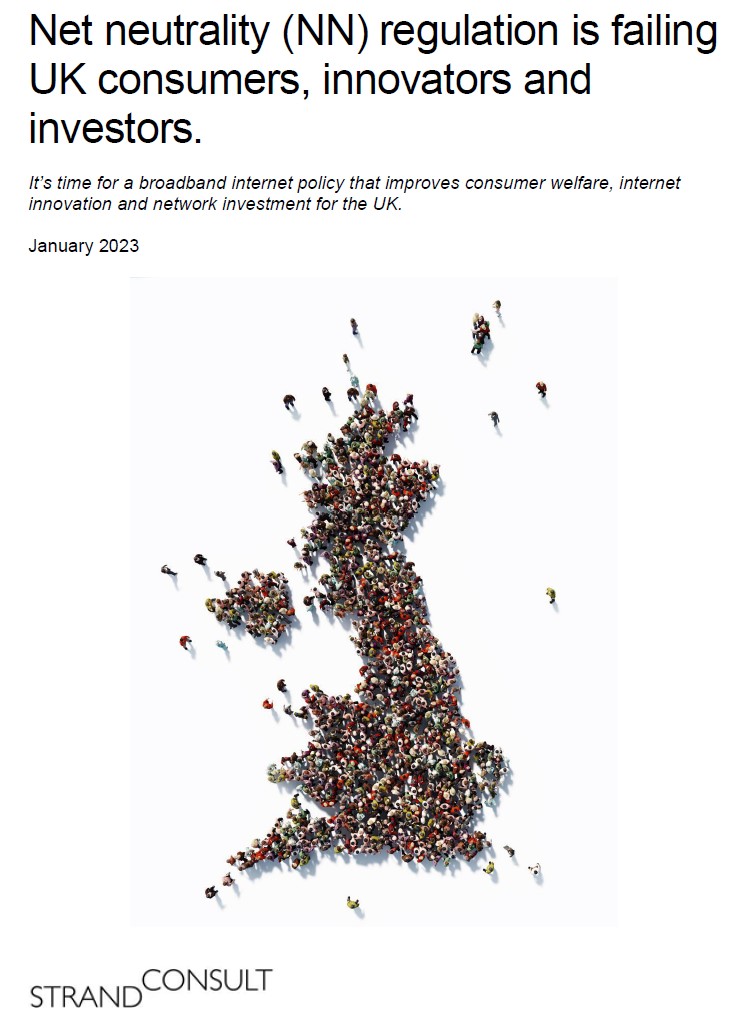 Strand Consult, an independent consultancy focussing on the telecoms industry for over 25 years, has published a new report which finds that the UK's net neutrality regulations are harming consumers, innovators, and investors. Further, it highlights that those countries which do not have strict net neutrality rules have demonstrated consistent improvement in consumer welfare, broadband investment, broadband speed, 5G innovation, and consumer value, suggesting that the UK is being held back by unnecessary regulations surrounding net neutrality.

The report concludes that it is time to review the UK's net neutrality regulations to ensure broadband internet policy is developed so that it can better improve consumer welfare, network investment and internet innovation.

Please find below some further details from the key findings of the report:

NN regulation has made UK broadband internet less accessible, less relevant, and for some users, deprived them of more affordable products. During the pandemic, UK end users were blocked from accessing educational content via free data and zero rating programs. Ofcom had to suspend the misguided NN regulation so that people could learn online freely. Ofcom recognises the value of free access to education and proposes to change its guidance and enforcement practices. Ofcom also recognises that NN regulation unwittingly makes networks less efficient and more costly to build but is limited in what it can do. More substantive reform is required from the Government.

The UK never experienced harmful, systematic violations of NN, even before rules were imposed in 2015. At that time the UK was ahead of the European Union (EU) in internet regulation and already had rules to protect end users and internet access. Moreover, the major broadband providers had made voluntary commitments to Ofcom to ensure internet openness and transparency about network management practices and performance. Ofcom deserves commendation for recognition that NN regulation should be updated given technological development in broadband networks and the internet ecosystem globally. In any event, robust competition and a pro-consumer regulatory framework already exist in the UK to protect internet users and openness.

Updating NN regulation can deliver as much as £340 million annually in free cash flow, which can help the UK achieve its 2030 5G goals and close the 5G investment gap, estimated at £25 billion. The UK is not on par with leading 5G nations in per capita mobile wireless investment.

Two-sided markets is a natural, commonly-accepted, and Nobel Prize-recognised explanation for economic relationships across the internet economy. It describes how broadband providers engage with end users and content/application providers to get both sides of the market on board. Diverse value propositions and pricing flexibility maximise participation on both sides.  However, NN regulation arbitrarily and illogically restricts broadband providers from having commercial relationships with one side of the market. This deprives the UK of dynamism. This report suggests that to be a global 5G leader, NN regulation should be removed, and the UK's prior and superior broadband regime be restored. The UK Government should seize the opportunity to modernise broad internet policy, improve outcomes for consumers, and unleash the growth potential of the UK internet economy.

For further information about the report and its key findings, and the opportunity to request a copy of the report please contact Strand Consult.