Connecting the UK – Why we need to start locally 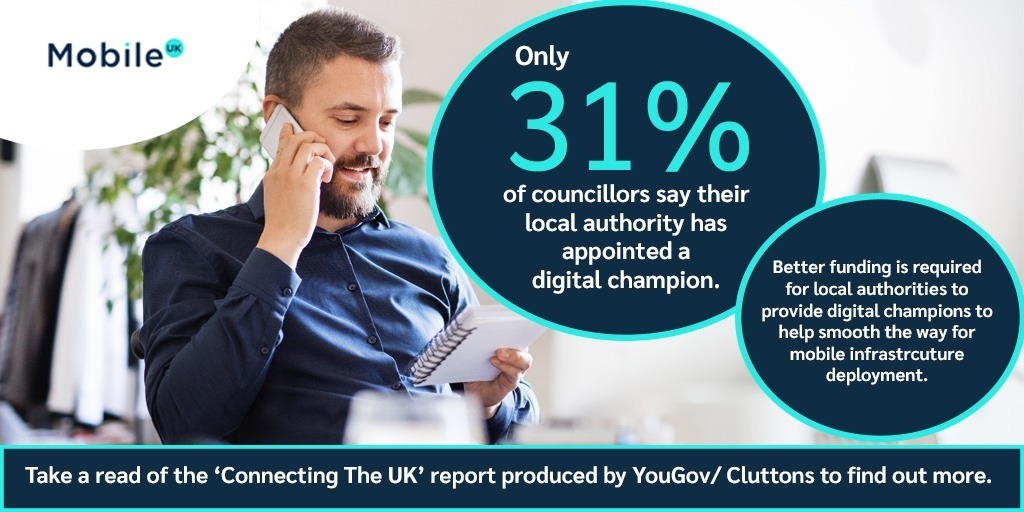 A blog written by Mobile UK's Director of Policy and Communications, Gareth Elliott, looking at the potential solutions to mobile deployment. This follows on from research published by Cluttons and You Gov which found that a lack of understanding, collaboration and funding threaten the UK's connectivity. The full report can be read here.

This article can also be read on LinkedIn here.

Digital connectivity today is an essential element of modern society and has become ever more pivotal throughout the pandemic; and, as we look to the future, it is difficult to imagine any scenario where it will not be central to our vision and ambitions for what will come.

While we look to self-driving vehicles and a world of virtual and augmented reality it is in the everyday that digital connectivity will have its greatest impact. The pandemic has already revealed a world in which home or mobile working has become the norm; new phrases such as ‘you’re on mute’ or ‘zoom-bombing’ have become part of our everyday lexicon. The app economy has revolutionised how we shop with everything from groceries to a new car ordered via a mobile phone app.

Looking forward digital connectivity, underpinned by mobile connectivity, and the step change that will come with 5G, will become ever more crucial. Our ability to fight climate change will be significantly enhanced due to the connected ability of sensors and the internet of things (IoT). This means we will be able to monitor and take action to mitigate global warming, industries will benefit from enhanced productivity, efficiencies and reduced wastage, andsocial care will be transformed by bringing doctors, patients and families closer together improving patient monitoring and helping to reduce hospitalisation; local councils’ own digital transformation strategies will radically improve service provision and access to local public services and the Government’s own ambitions to level up and promote digital inclusion will be built on the availability of world class connectivity.

What is the issue? Are our leaders prioritising digital connectivity?

The UK Government views digital connectivity as vital for the nation’s future prospects. It has set a target of delivering 5G to the majority of the population by 2027. In turn, it is in the process of proposing changes to laws which will help speed up network deployment and increase coverage, reforms which, according to a new survey by Cluttons and YouGov, are supported by 63% of MPs to speed up gigabit rollout. At a local level the report suggests 63% of councillors agree that nationwide rollout of broadband and 5G is vital to levelling up the UK and 77% support further broadband and mobile infrastructure and equipment being rolled out in their local areas.

The picture provided is one where gigabit broadband and 5G deployment is universally supported yet the picture on the ground often does not match the rhetoric at the top.

The mobile industry has consistently raised the issue of barriers to deployment; indeed, the Government set up a Barrier Busting Taskforce in 2017 which is working with the industry and other stakeholders to help identify issues, but it is realities at the coal face which are often the trickiest impediment to solve. While digital connectivity is widely supported and encouraged it is not often fully understood. Where it is acknowledged, funding shortfalls mean that it is seldom prioritised.

With strained resources local authorities are unable to allocate focus, time and people to coordinate local digital connectivity strategies. Indeed, the Cluttons/You Gov poll identified that only 45% of councillors said that their local authority had a digital strategy in place and less than a third (31%) stated that their council had assigned a dedicated role of Digital Champion or similar.

Without a responsible coordinator or person with the relevant expertise and skills councils are often not set up to undertake effective digital strategies or build relationships with telecommunications providers. It is therefore unlikely to be surprising to those on the ground that less than a quarter (22%)of councillors believe their local authorities' relationship with telecommunications providers is effective. Less than a third (32%) believe enough is being done to help smooth the way for rollout of telecommunications infrastructure and equipment in the local area.

Without the correct people in place or the strategies to help the deployment of mobile and broadband infrastructure an information and understanding gap is created. According to the Cluttons/YouGov poll only 35% of consumers understand 5G and only a quarter believe nationwide access to 5G and gigabit capable broadband will be beneficial to them.

Without local leadership and a good understanding about the benefits of digital connectivity and why it is needed this can often lead to confusion, misunderstanding, ambivalence or an outright rejection from communities of the infrastructure required to provide the connectivity, be it a mobile signal or a cable connection. In the worst cases, this information gap has even led to direct physical attacks on infrastructure, and even the people employed to install it.

There are clear signs that some councils are taking a more proactive role to mobile and broadband connectivity and making it a priority:

The West Midlands Combined Authority has created West Midlands 5G specifically to smooth the way for 5G deployment and to enhance relations with the mobile industry; the Greater Manchester Combined Authority is working with industry to develop its digital strategies through its Digital Advisory Board; Glasgow City Council has a dedicated digital team undertaking a programme of barrier busting; and Sunderland City Council was recognised as Digital Council of the Year in 2021 due to its journey to embed fully digitised departmental operations, digitally empowered team members and extended reach into local communities.

According to the Cluttons/You Gov report these initiatives are having a positive effect. It found that of those local authorities that have a strategy for digital development in place they are:

What needs to be done?

The unambiguous evidence that where local authorities have a strategy in place rollout of digital connectivity is enhanced points to the need for the Government to take a closer look at how it assists councils on the ground.

Digital Champions, with the right funding and skillset are vital to building understanding and coordination both within local authorities and with the industry. Clear leadership, both politically and at the officer level builds better understanding of the technology and how it will benefit the council, residents, and businesses to enhance local areas.

If we are to fully benefit from the transformative effects of a digitally connected world it is crucial the rights tools are in place. Proactive local authorities have shown what can be done with digital champions, digital teams, and digital first strategies. Now it is time that the Government considers how to put the right finding, skills, and people in place to ensure that other councils up and down the country can follow suit.

This article has been written following the publication of the report Connecting the UK: Getting the nation gigabit ready by Cluttons and You Gov and references statistics from its findings. The full report can be found here.